T2K: One Big Fiesta of an Ultra 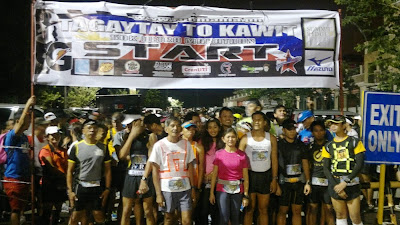 645.This is the figure posted by the organizer in its website (http://runmania.ph/)  as the number of "pavement warriors" that ran in the Tagaytay to Kawit 50-km race held in the weekend of August 24-25.


Truly a huge number of participants for an ultra marathon in the Philippine archipelago. We are inclined to believe that indeed this event is the biggest delegated ultra marathon race in the country.

It  was indeed a big ultra. And looking at the hundreds of runners massed at the starting line  at the parking area of the Summit Ridge complex in Tagaytay City, we can use the words "fiesta big" to describe the  T2K. The runners and their hordes of supporters were  garbed in a kaleidoscope of colors. And more importantly, almost everyone was in a festive mood.  What was just lacking to call it a full-fledged island festival was an  ati-atihan band.

But the people at the helm of Run Mania were in no mood to be splurging on noisy peripherals but would rather focus on providing the essentials to take care of the needs of the running  participants. At the Talk from the organizers before the start, this was evident as the speakers consistently talked about "Aalagaan namin kayo." This is in  contrast to local  pioneers Bald Runner and Front Runner who both espouse a more Spartan discipline (No whining)  in the conduct of ultra marathon they organize.

Would Run Mania deliver on their word? Would there be indeed a  station (fully stocked with water, gatorade and food) every 10 kms? These  were the thoughts that crossed my mind as I lined up at the back of the starting area  with fellow 83neans, Bob Castilla and Ernie Badong, together with an ultra newbie in the person of fellow blogger and good friend Mau Gines aka Wandering Jouster (WJ). Just in case the organizer did not deliver on the stations, our small running group was prepared as we had 2 support vehicles to shadow us in our ultra adventure.  Foremost on my mind was being a pacer to WJ.  I told her that I have a 100% success rate as a coach and pacer to first time marathoners (42 km and ultra). I was focused to deliver on my promise to pace her to a finish well below the cut off time (which I initially thought as 9 hours but actually was 10 hours).

Come 11 in the evening (11:05 pm to be exact) of August 24, the 50-km race started.  It was a splendid sight to behold as hundreds of ultra runners, newbies and veterans, came rambling down from the Summit Ridge to the rotunda marking the start of the Emilio Aguinaldo highway. The huge number of runners occupied one side of the road. Pretty soon, the trio of WJ, Ernie and myself turned left at the Aguinaldo Highway and was on our way to the town of Silang.  In no time, we were at the first station at 10 kms. Yes, there was an abundant supply of both water and Gatorade plus potassium-rich banana. WJ commented that it was the first time for her to run for 10 kms without shortness of breath. This was a good sign.

Given the downhill portion, we made steady and fast progress in eating up kilometers. Pretty soon, we passed Silang and was entering Dasmarinas. The second station (at Km 20) came into view and again it was well stocked with water and Gatorade. There were hard boiled eggs as well. At the half marathon point, I checked our time and we were still running better than the 8.5 mins per kilometer pace that I planned for the first 35 kilometers.

By the time we reached the big junction of the Robinsons Dasmarinas, we turned left at Governor Drive. We were now at Km 28 and it was at this point that Ernie forged ahead at a faster pace, leaving WJ with the pacer BP.  The run along Governor Drive was a bit slower than the trot we had along the Aguinaldo  highway. This was because the terrain was a combo of uphill and downhill plus the Purefoods and Monterey manufacturing facilities in the area gave out some not so encouraging odor.

Reaching the 3rd station at Km 30 in Trece Martires, we  turned right to Govenor Ferrer Drive which would lead the runners to the town of General Trias. We loaded up on some eggs and Gatorade in this station. At Km 35, I checked our time and we were still running better than the 8.5 mins per km pace. Wow, I said to myself.  WJ was proving to be a Gabriela of a warrior.

I guess I spoke too soon as the 5 kilometers to Km 40 felt  agonizingly slow for us. WJ was complaining of some muscle pains in her mid section and had to stop a few times to do some stretching. We downgraded the Galloway to 2:2 from the 4:1 we did from the start. At a handful minutes passed 5am, we reached the 4th station at Km 40 which was located at the town proper of General Trias. Much to our astonishment, there were ice cream cones in abundance.  This is a first for me in ultra running.

At the 42-km mark where our support vehicles were waiting for us with hot pan de sal, lead driver Orly informed me that our time was now at 6 hours & 20 minutes.  While this meant that we were now slower than the 8.5 mins per km pace, this brought a smile as this meant that WJ had posted a personal best for a full marathon distance (her previous best was higher than 6 hours & 30 mins). But no time to celebrate as we had 8 more kilometers to conquer before we could call WJ a true blue ultra runner.

Changing into fresh pairs of running shoes and shirts refreshed the both of us and we were cantering steadily towards the town of Rosario, home of the Cavite export processing zone. Reaching the town of Rosario, we turned right at Marseilla which leads to the town of Noveleta.  Our progress slowed in this road due to its narrow lanes and the fact that the sidewalk was littered with flood debris of all shapes and smell. A hundred meters before the town proper of Noveleta, I saw our support vehicles on the side of the road and Orly told me that the odometer read already 50 kms but the Aguinaldo shrine was still at least 3 kilometers away.

The T2K was actually a 53-kilometer race. We gamely trudged the last 3 kms (not walking all the way as this would be anathema to my Galloway principles)  and as we turned right for the last time, there to greet us was the welcome sight of the finish line in front of the historic Aguinaldo shrine.
Despite the small buses that seemed to block the way, I dare say that the T2K finish line was the best finish line of any 50-km ultra I have joined. This was because all the finishers were given the distinct and singular privilege of raising the finish banner and having a couple of minutes to have all the photographers click away. Just that was worth the price of registration. And WJ definitely took graceful advantage of the rare opportunity. Welcome to the Ultra running community. 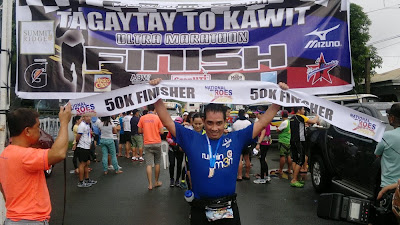 For the record, the finishing time(s) of our Bicol running group are as follow:


Congratulations to Run Mania. May you organize many more ultras.

Congratulations to WJ and all the new ultra runners.

Thank you to Orly, Ed and Fards for the support.

thank you very much, vicboy.

i said my piece in my wj and allow me to say it again, "you are truly one hell of a coach/pacer/running buddy. i doff my hat to you!"

cheers! looking forward to more road joustings with you, maestro. :-)

Always a pleasure to be of assistance to a fellow runner, especially one from Bicol. Again, congratulations on your first ultra marathon.

BP
I am a Bicolano by birth and choice. By any standards, I am a slow runner but I like it that way. I look at running as a healthy and exciting way to make a difference. Together with my fellow runners from our family, school, office, and the community, we use running to give back.

Promote Your Page Too

DROP ME A LINE